Faith and Immigration – from the United Church of Christ

“A wandering Aramean was my ancestor; he went down into Egypt and lived there as an alien…” (Deuteronomy 26:5)


“You shall not oppress a resident alien; you know the heart of an alien for you were aliens in the land of Egypt” (Exodus 23:9)

Concern for aliens is found throughout the Bible, particularly in the Hebrew scripture.  The United Church of Christ has demonstrated a similar ongoing concern with immigration in the United States and with the well being of immigrants. As early as 1981, General Synod 13 issued a Pronouncement, “Justice in Immigration,” which called for refugees and immigrants to be given constitutional and labor rights; declared opposition to sanctions against employers; urged penalties against exploitation; supported the granting of regular legal status to undocumented persons; and called for the church to support immigrants and refugees.

In a resolution opposing the construction of a wall – also known as a “security fence” – between Israel and Palestine, General Synod 25 stated: “We are called to be people of reconciliation and called to engage in the act of reconciliation… When barriers are constructed, hostility that exists becomes exacerbated. Differences between peoples can only be addressed through bringing them together, not by adding further divisions. By breaking down walls that separate, we actively seek peace and reconciliation in the world and attempt to follow Jesus’ example”.

The immigration policies of the United States are complex and far reaching. They need to be understood within the broader context of trade, globalization, territorial expansion and hemispheric dominance. The border is not a line in the sand, or a river bed alone.  One political border splits the Tohono O’odham nation, leaving family members divided by citizenship.  It also separates peoples that have dwelt in the southwest for centuries into different nationalities. In Florida waters, the United States Coastguard keeps Haitian and Cuban rafters from reaching our beaches with the same zeal that the Border Patrol uses to prevent Mexicans or Salvadorans from crossing into Arizona. Conversely, no amount of protest from the Cuban government has protected that nation’s sovereignty against the unwanted presence of an American military base in its territory, making Guantanamo a border town. Similarly, the presence of United States’ firms and manufacturing facilities has refashioned the economy and ecology of broad expanses of our southern border. The undisputed American military, political and economic hegemony in this hemisphere makes protectionist laments sound rather hollow. It is rather inconsistent to seek to bring down trade barriers while erecting walls on the border.

The sacred scriptures of our Judeo-Christian faith are a compendium of migration stories. Adam and Eve were expelled from Eden, their homeland. Noah and family became boat people adrift without a destination. Sarah and Abraham were mandated to migrate and, for generations upon generations, God’s people were nomads. The meta-narrative of the Judaic faith is the story of the exodus and the subsequent migration into, and conquest of, what became known as the ‘promised land’.

The Hebrew people seized land occupied by other nations with the same sense of religious justification that European Christians seized and occupied the Americas in God’s name. The same theo-political position was used by the United States to justify the western expansion, the seizing of Indian lands, the annexation of Mexican territories and the occupation of former Spanish colonies. The United States’ hegemonic stance as the world’s one undisputed power in the early 21st century must also be understood in the context of an influential theology in which Christianity and America become closely identified. Trying to reconcile such views with tough border policies is challenging.

“For he is our peace; in his flesh he has made both groups into one and has broken down the dividing wall, the hostility between us. (Ephesians 2:14)

In a world made small by technology and trade, isolationism is not a viable option. Whether or not the Congress is able to achieve an immigration bill that is signed into law by the President, the influx of immigrants cannot be stemmed by enforcement alone. The United States is the largest exporter nation, the world’s foremost military and economic power, and the best known country in the world.  The peoples of less affluent nations are lured by the commercial and entertainment icons that incessantly project the image of American wealth. They always have. But a new unprecedented south to north migration is taking place.

The contrast between the affluence of the developed nations and the abiding poverty, diseases, famines, and wars of the 2/3s world is a stark reality that cannot be ignored nor denied. As long as that is the case, desperate people will take desperate action.   Embarking on an ocean crossing on a raft is a desperate act. So is crossing the Sonoran desert on foot. They are the actions of desperate people who have no other options. Addressing the causes of the world wide, south-north migration will be far more effective than enforcement of immigration laws, more conducive to peace than 370 miles of triple wire fences, more pleasing to God than a thousand burnt offerings.

Click this link to go to the UCC webpage concerning Immigration Justice:  https://www.ucc.org/?s=immigration 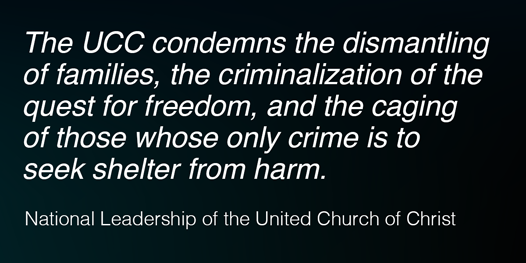 Immigration Justice from our Conference: The PSEC:

As Christians, we are called to love our neighbors. The Bible is unambiguous and explicit in calling us to welcome aliens and strangers in our land, and to love them as we love ourselves. The United Church of Christ has historically demonstrated concern over anti-immigration sentiment in the United States, and supports the well-being of immigrants. As early as 1981, the UCC General Synod:

PSEC Justice & Witness ministries continues to advocate on behalf of immigrants and refugees, regardless of their faith tradition or nation or origin. 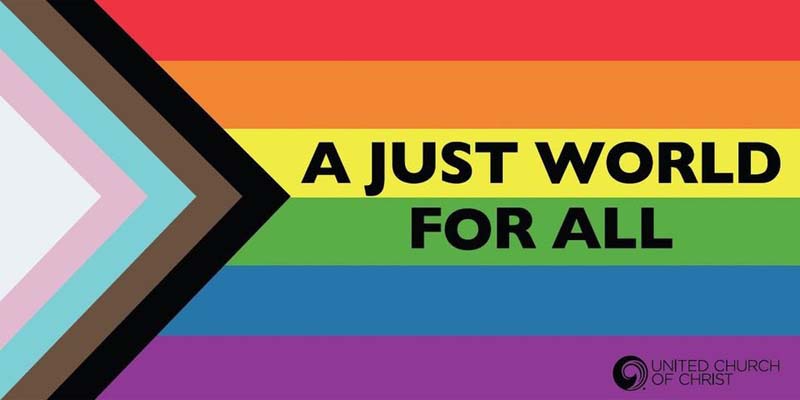