The 2022 church picnic is being planned for Sunday, June 12 at Plains Mennonite Park on Orvilla Road near Rt. 63.  Details will be announced soon.

The St. John’s Church Picnic is our largest non-worship social gathering of the year, an annual event that has taken place early in June for decades.  Our picnic is currently held the 2nd Sunday of June at 12:00 pm at Plains Park, a picnic facility located adjacent to Plains Mennonite Church on Orvilla Road in Lansdale about 5 minutes west of our church just off Rt. 63.  The facility includes a large covered pavilion (with a restroom) with picnic tables & benches on a concrete floor, close to parking and with paved walkways it is accessible to all.  There is also a large grassy field with trees, a children’s playground, and lots of area for games, recreation and walking.  (In case of rain, the picnic is held in our Assembly Hall.)

Each year our Board of Deacons take charge in preparing the main course, often hamburgers & hot dogs (with vegetarian options) on the grill and sometimes supplemented by a special event like a catered pig roast!  Our congregation supplements the meal by bringing a variety of salads, snack items & desserts.  Beverages, cups, cutlery & plates are provided.  There are sign-up sheets during Fellowship Time for several weeks before the picnic to list what you are bringing so that we have a good variety.  (Yes, there was the year before sign-ups that almost everyone brought plates of deviled eggs to share!)

Other activities include outdoor ‘picnic games‘ for all ages and skill levels.  The Board of Educators organize and run the games, which may involve relay races and a water balloon toss.  There is also a ‘candy toss’ by the pastor for the younger children. 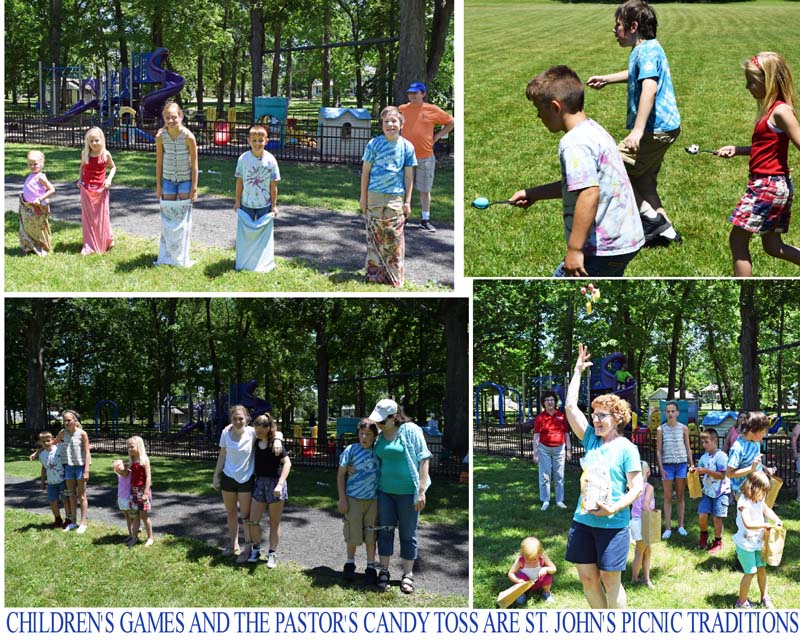 Since 2006, the picnic has also featured the drawing for our annual St. John’s Basket Raffle fundraiser.  Themed baskets are created and donated by groups & individuals in the church and displayed for several weeks after worship in May and also to the community on Lansdale Day the first Saturday of June.  Persons may purchase raffle tickets for any baskets they are interested in winning.  There is one last chance to buy tickets at the picnic, and after the lunch, the winning names are drawn.  Winners who are present take their baskets home; the others are held and the winners notified to pick up their prizes later (so you do not have to be present to win, and many winners come from Lansdale Day ticket sales.

The “old-fashioned church picnic” tradition goes back many generations at St. John’s.  Longtime members remember it was held in September on the church grounds, then for many years in June at Isaac Smith Park in downtown Green Lane, which featured a large pavilion for cooking & serving the food plus smaller pavilions for dining, plus large fields for games, horseshoes & volleyball.  Back then people brought their own dishes, & some families had some very nice sets of picnic-ware!  Many of the games then were geared toward ‘couples – the traditional 3-legged sack race and hard boiled egg toss were yearly events, plus children’s games & the candy toss.  For several years a barbershop quartet entertained.  The day ended with a softball game – some people remember the long run from the field to the cars when it would suddenly rain!  The park fit our needs for may years, but it became too long a drive for many people & was not easily accessible to some.  The picnic moved in the mid-2000’s to Parkside Place in North Wales – again, a wonderful facility & closer, but involved too much walking for some – especially to the distant restrooms.  Soon after that Plains Park was built, and has been our ‘perfect’ picnic location ever since.