St. John’s church has been a vital part of downtown Lansdale, Pa. on the same corner since 1876!  The information below highlights our history as recorded during our anniversary celebrations and during our various building projects.  The first anniversary celebrated at St. John’s was the 20th anniversary of the dedication of the original church building (1878) on May 29th, 1898.  There is no record of a 25th anniversary of the founding, which would have been in 1901.  We will celebrate 150 years in 2026!

Since then, we have celebrated the anniversary of the founding of the church in January, 1876 every 25 years, starting from our 50th anniversary in 1926.  While this tells the basic history of our congregation, within these dates and buildings is found the real mission of St. John’s, spreading the “Good News” of God’s creation and our salvation through Jesus Christ, in our worship and studies since 1876 and continuing on in the future!

See our “History of our Pastors” page on this website for more about the pastors who have led our congregation through the years.

St. John’s Was Started as part of The Reformed Church in SE Pa.

With a great wave of German immigrants coming to southeastern Pennsylvania in the late 1700’s to mid-1800’s, many new Reformed and Lutheran churches were formed in the area.  Many were formed as “union churches” with separate services for each denomination, and most services were in German until the 1860’s, when some English services also began.  All of the area Reformed churches were derived from St. Peter’s church in Hilltown as part of the Tohickon Classis.  On May 15, 1874, a committee appointed by the Tohickon Classis came to Lansdale and began holding services from time to time at the recommendation of the first annual meeting of the Tohickon Classis.  St. John’s held occasional services in late 1875 under the guidance of Rev. Jacob Kehm at Althouse’s Hall (a public hall for meetings) in Lansdale in the afternoon or evening.   On January 30, 1876, a constitution was adopted for St. John’s Reformed Church in Lansdale.  On September 25, 1878, St, John’s became part of the Hilltown Charge.

On October 15, 1876, the cornerstone was laid for the original church building with Rev. Jacob Kehm & Rev. J.L. Dangler of Sellersville officiating. In the forenoon Rev. Kehm preached in German & in the afternoon Rev. Dengler preached in English.  The Sunday School held its first service in the church on November 4, 1877.  The first worship service in the building was in the evening of December 23, 1877 with Rev. A.B. Koplin preaching in English, and Rev. Rev. S.K. Gross preached the first service in German on December 30, 1877.

Dedication of the church took place starting Saturday, May 25, 1878.  Dedicatory and services preparatory to the Holy Communion were on Saturday afternoon conducted by Rev. Dangler in German and Rev. S.M.K. Huber preached in English in the evening with Baptism administered.  Sunday morning May 26, 1878, the morning service admitted to membership the first catechetical (confirmation) class of 15 new members.  Rev. Dr. E.V. Gerhart of Lancaster preached in English, followed by an afternoon service in German by Rev. Jacob Mechter, with services closed in the evening.  Rev. Koplin assisted through the two days of services.  Attendance was large both days with the streets in the vicinity crowded with people unable to get in.  At a meeting of the Tohickon Classis of 1978 it was recommended to hold services in this church at least once every Sunday.

At a congregational meeting on April 15, 1879 Rev. James Schultz was unanimously elected as the first pastor but he declined the charge due to declining health.  On May 18,1879, Rev. H.F. Seiple preached to the congregation, and served Holy Communion on June 15th, and he was unanimously elected pastor on June 30th.  Rev. Seiple continued to serve both St. John’s and St. Peter’s Reformed Church in Hilltown until November 26, 1884, when St. John’s was detached from the Hilltown charge.  On May 1, 1885,  St. John’s became a mission (no longer under the care of another church).  On February 22, 1885 a congregational meeting elected Rev. J.J. Rothrock as pastor.  (See our History of our Pastors page for more information.)

(Much of the above history comes from a History of St. John’s Reformed Church which was read at the 20th anniversary of the dedication of the church May 29, 1898 and is stored in typewritten form in our church archives.)

Below is a brief history of St. John’s church from 1876 to 1963, written by Rev. Raymond Deily Groff, our Associate Pastor at the time this was written.  He researched the history and wrote it as a story for the children of the church at that time, and it still provides a complete summary of how our church was founded and grew during those years.  We have preserved this here in his original typewritten form (he did all his work on a Royal portable typewriter.)  More about Rev. Groff and all of St. John’s pastors on our History of our Pastors page. 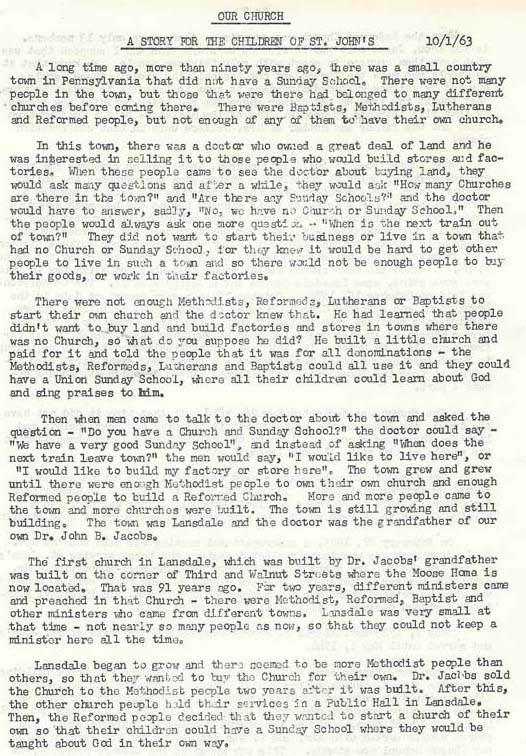 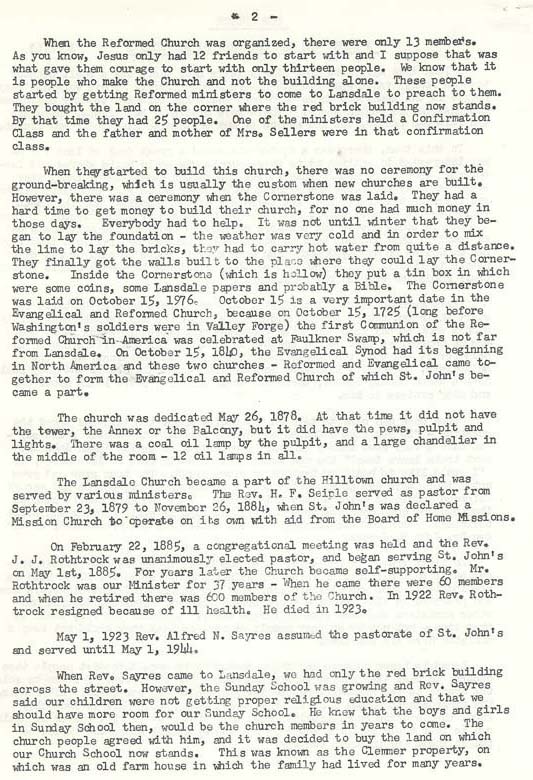 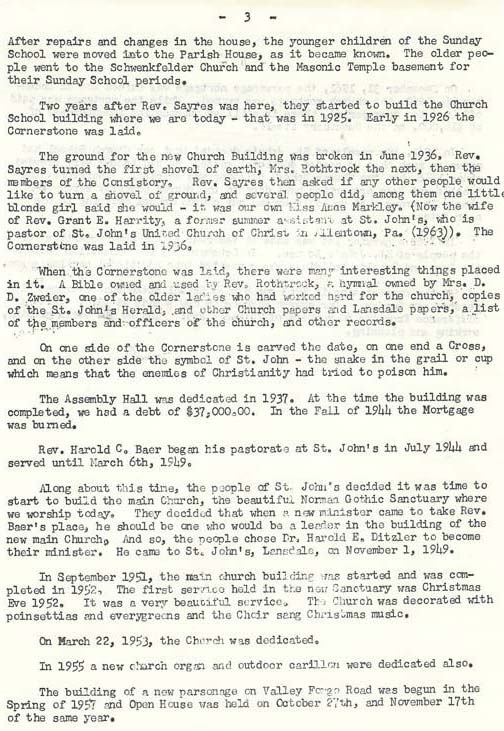 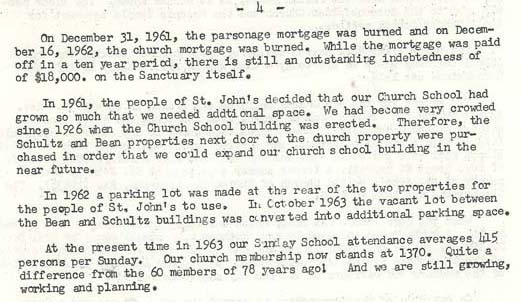 Below is a history of some major events in the history of St. John’s church from 1876 to present shown in photos and from our publications through the years. Note: The original 1876 building was razed in 1965. 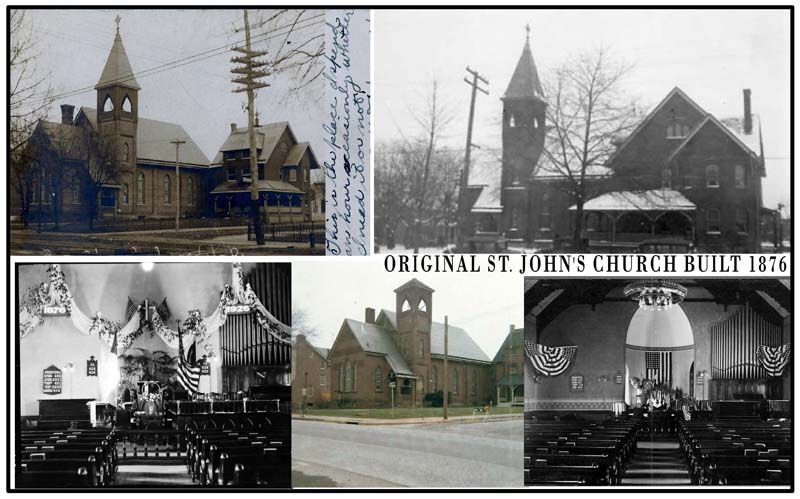 The first noted “anniversary celebration” at St. John’s church was for the 20th anniversary of the dedication of our original church building (which took place on May 26, 1878), held on May 29th, 1898 – the program is shown below. 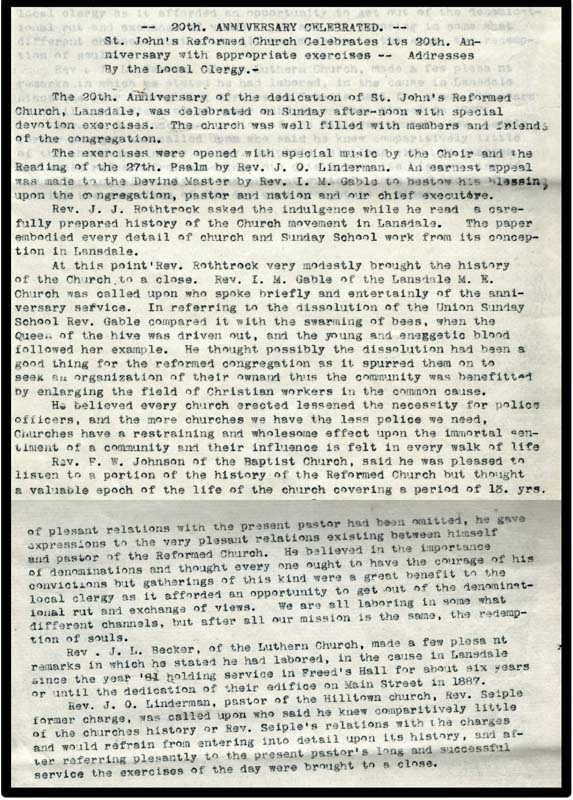 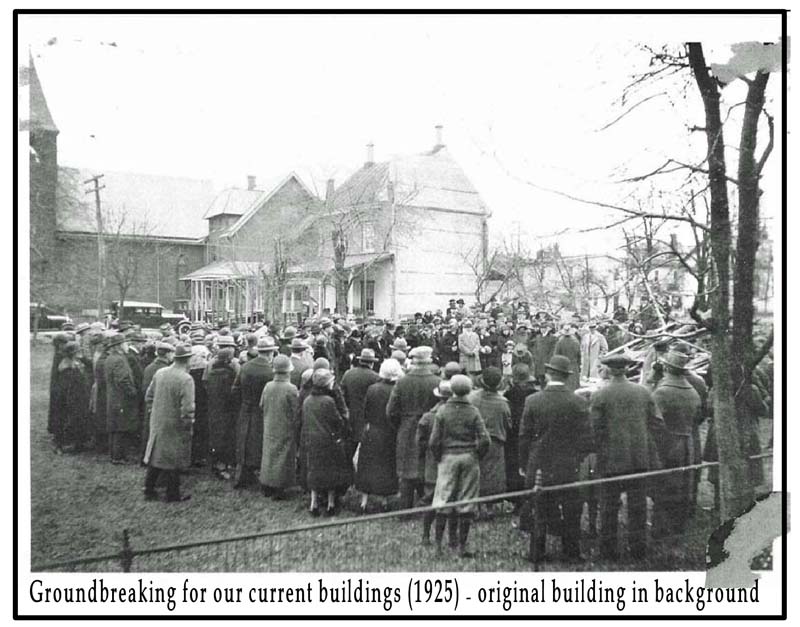 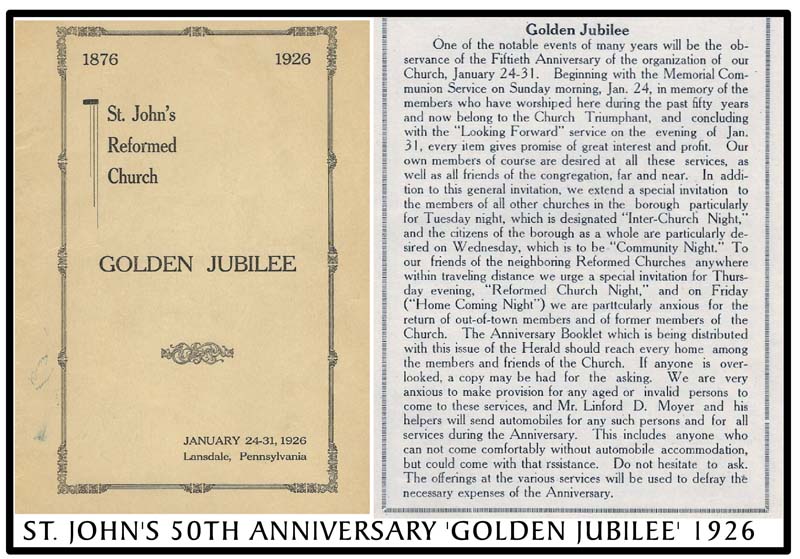 The following is an historical sketch from the St. John’s Reformed Church Golden Jubilee program of January 24-31, 1926: The early years of St. John’s church. 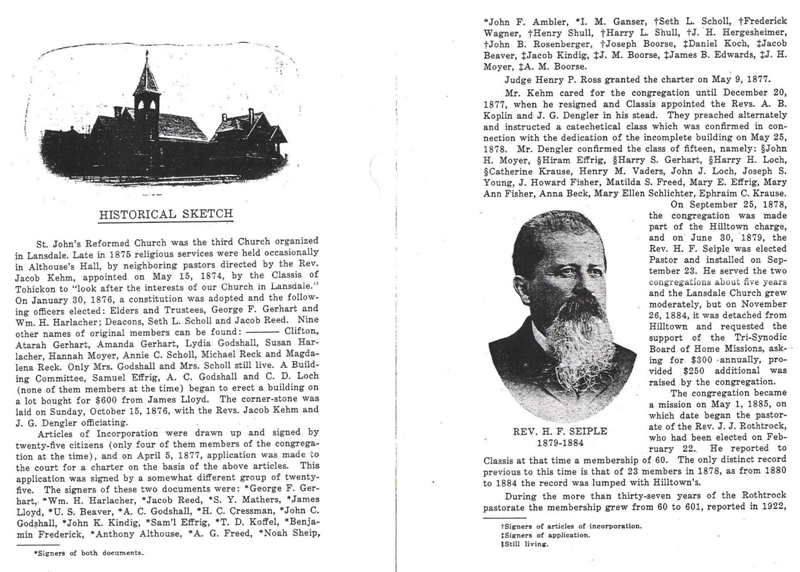 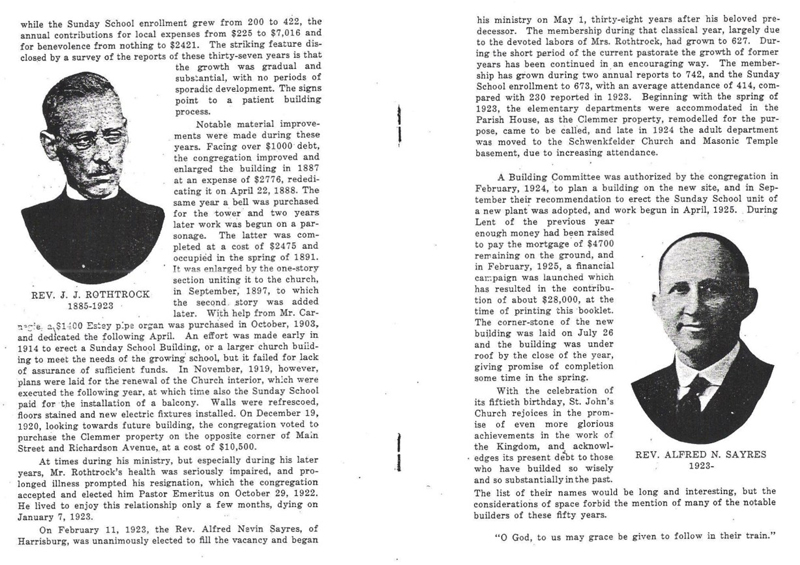 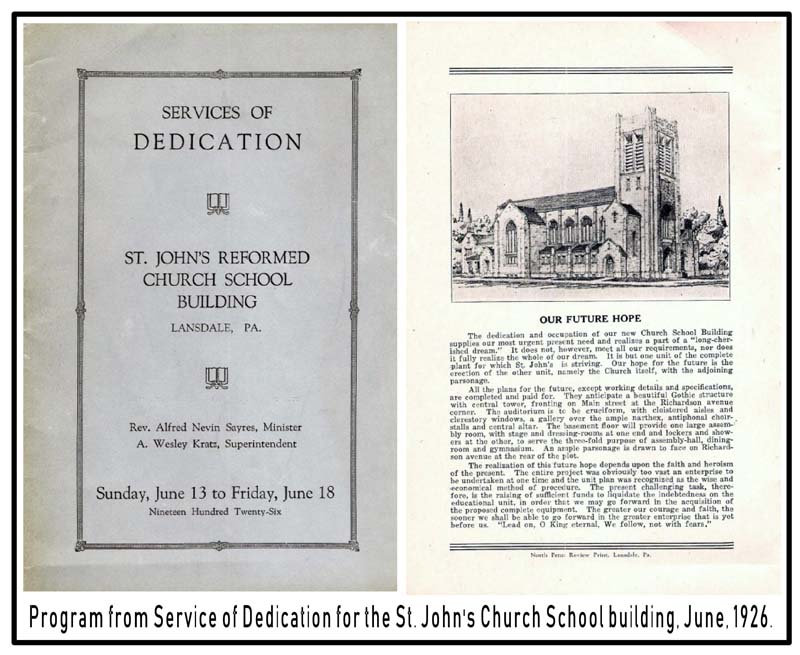 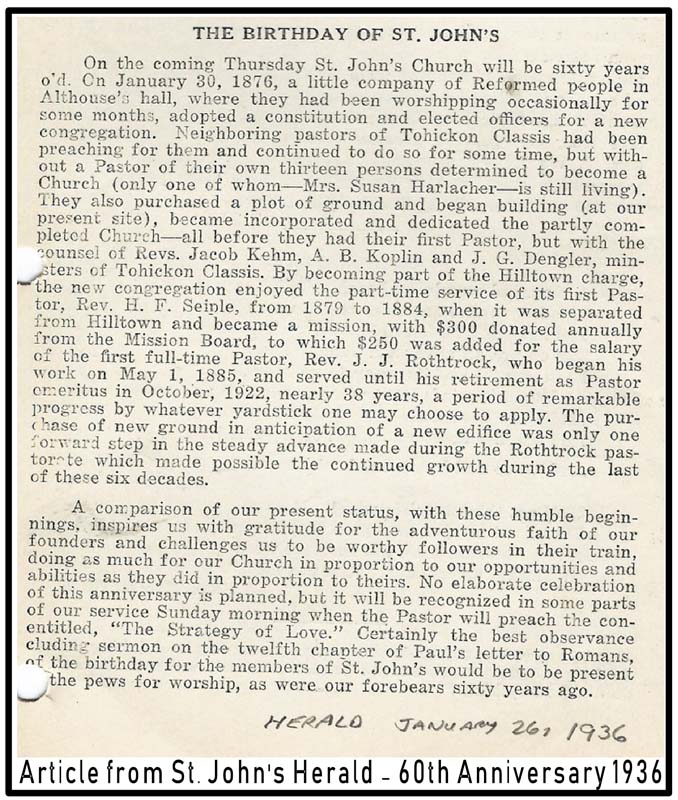 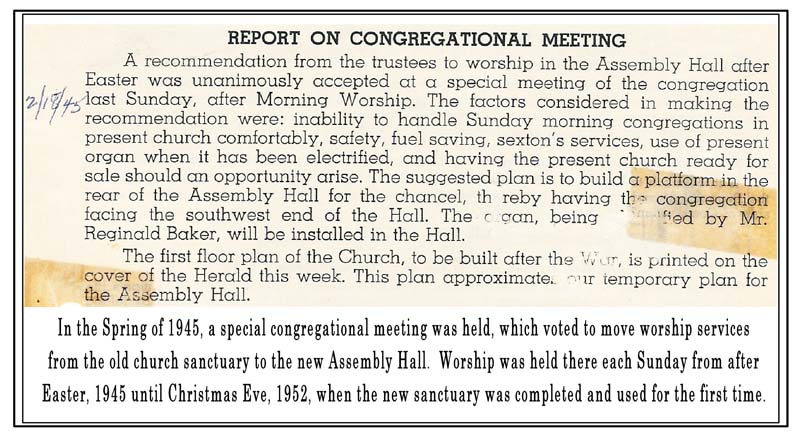 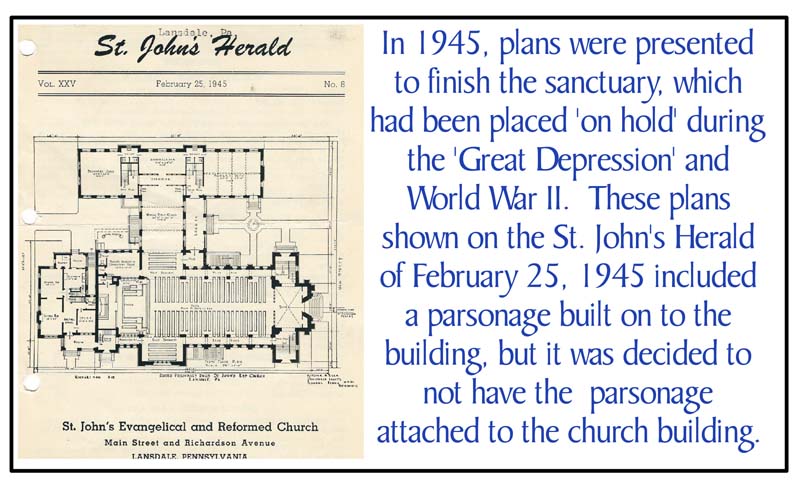 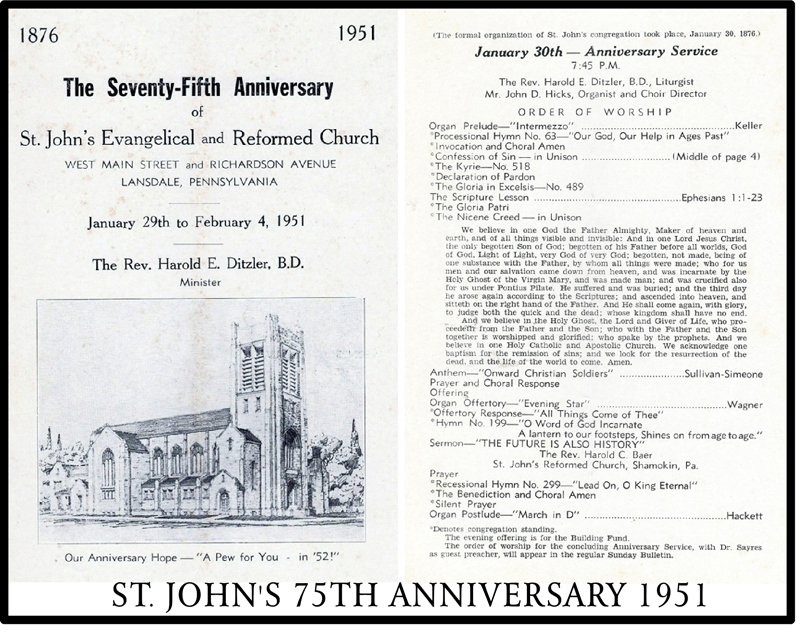 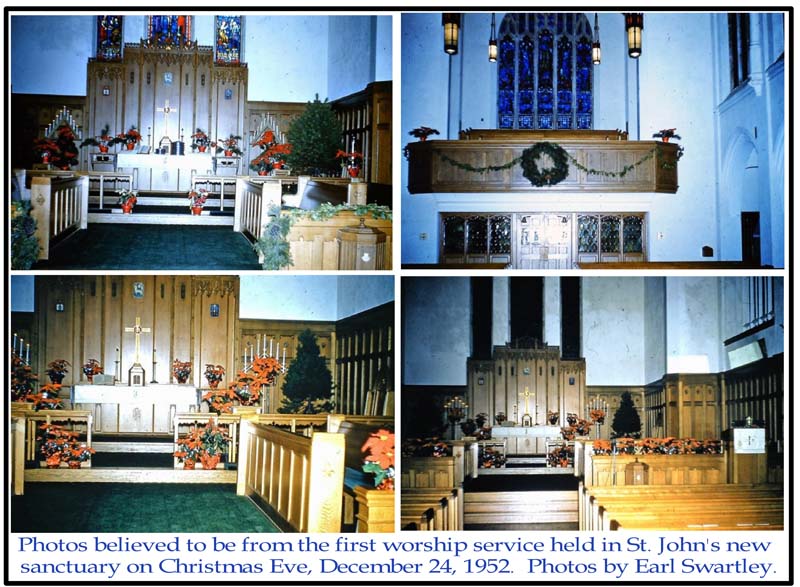 The new sanctuary was finished in late 1952 and the first service held was on December 24, 1952, 11 pm, Christmas Eve.  The dedication of the new sanctuary took place on March 22, 1953, and the church mortgage for the new building was burned in 1962. 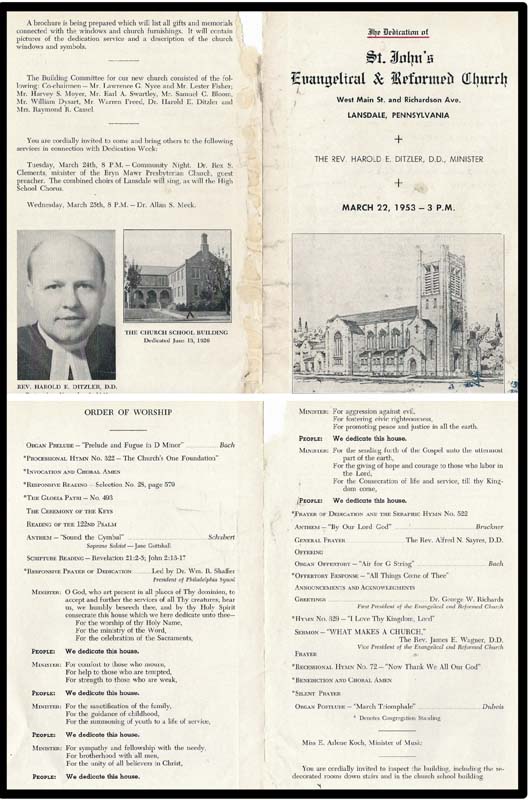 Article from April, 1965 about the original St. John’s church building being razed. 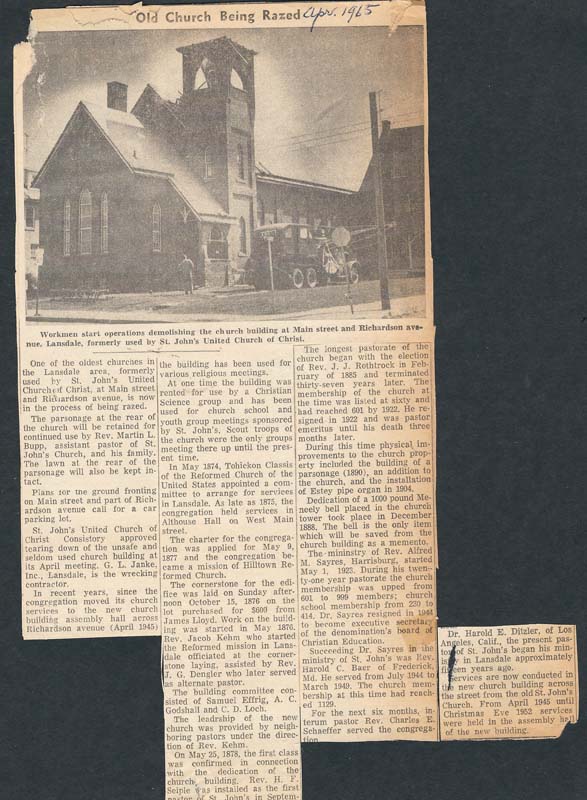 On Nov. 14, 1971, a new tradition began at St. John’s, displaying a rosebud on the altar honoring children born to our members or extended family of our members.  Also in 1971, a new Constitution and By-Laws were adopted, with the official board changed from a Consistory to a Council. 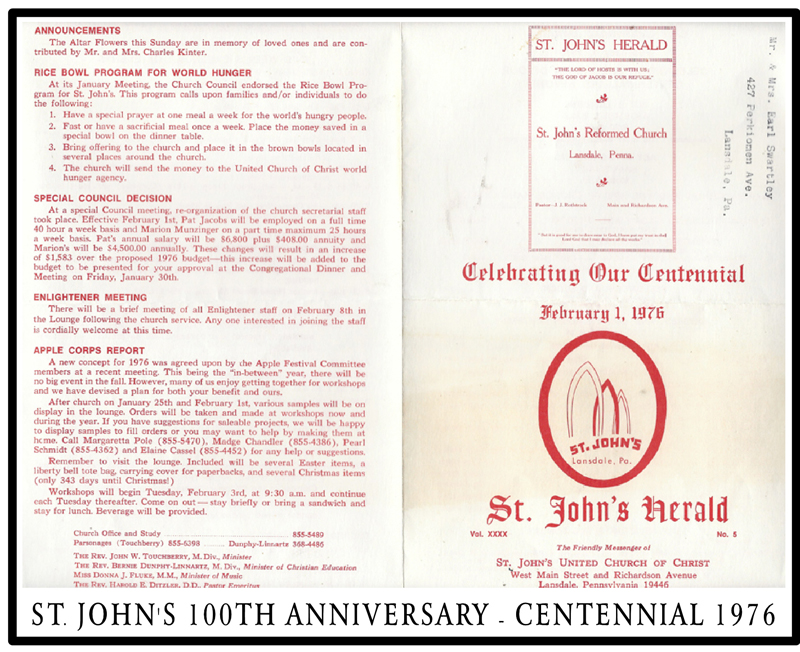 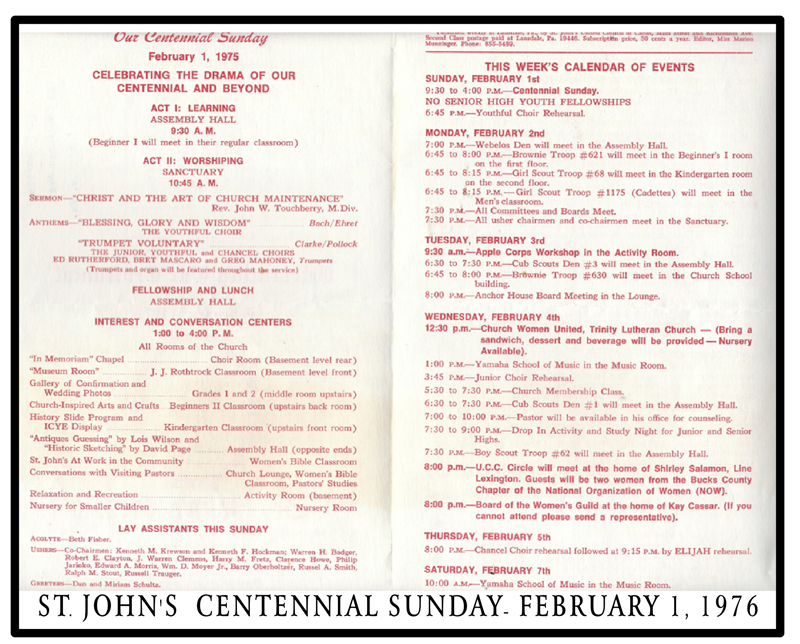 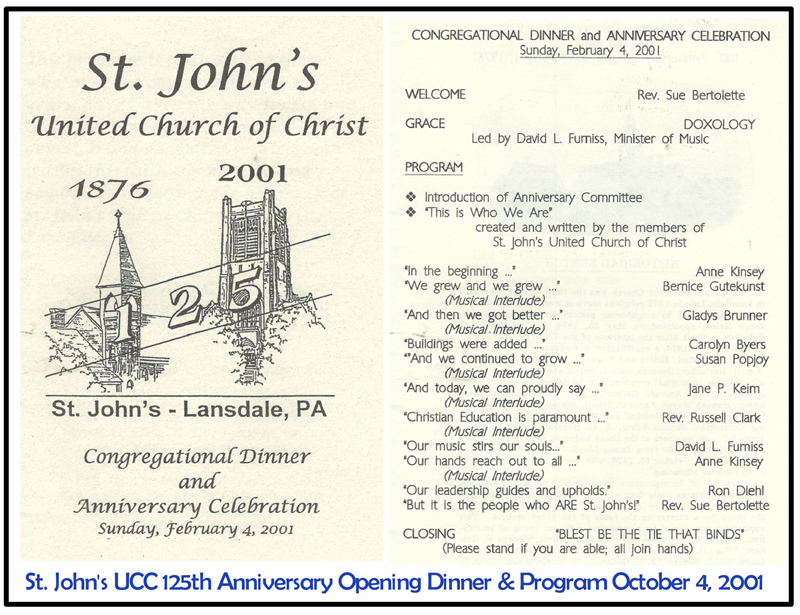 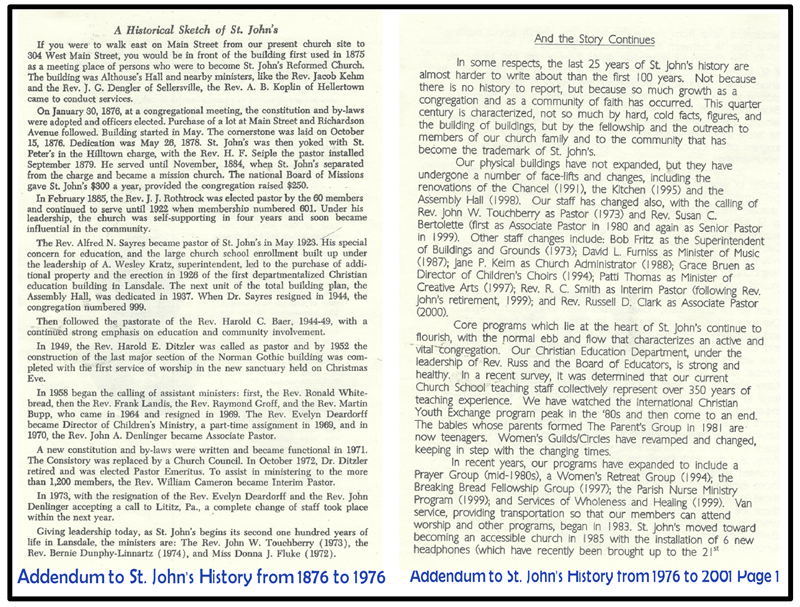 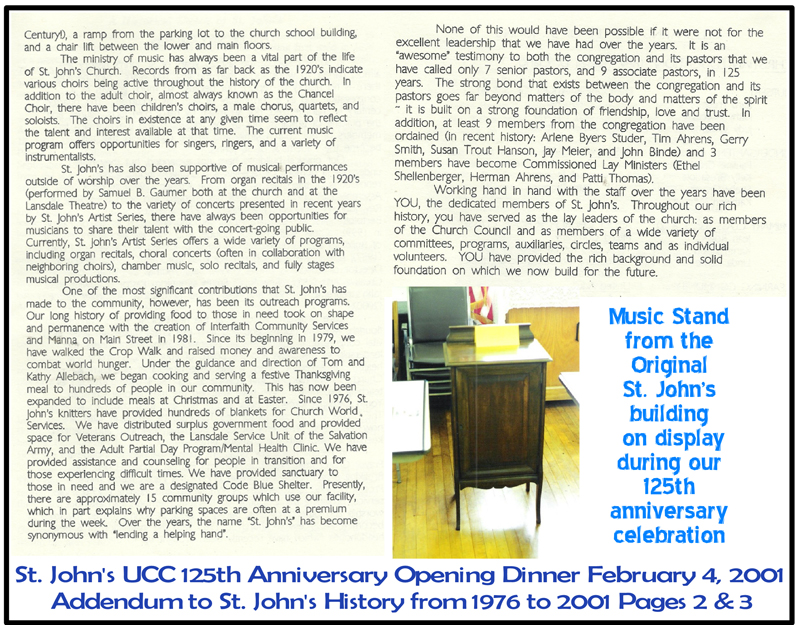 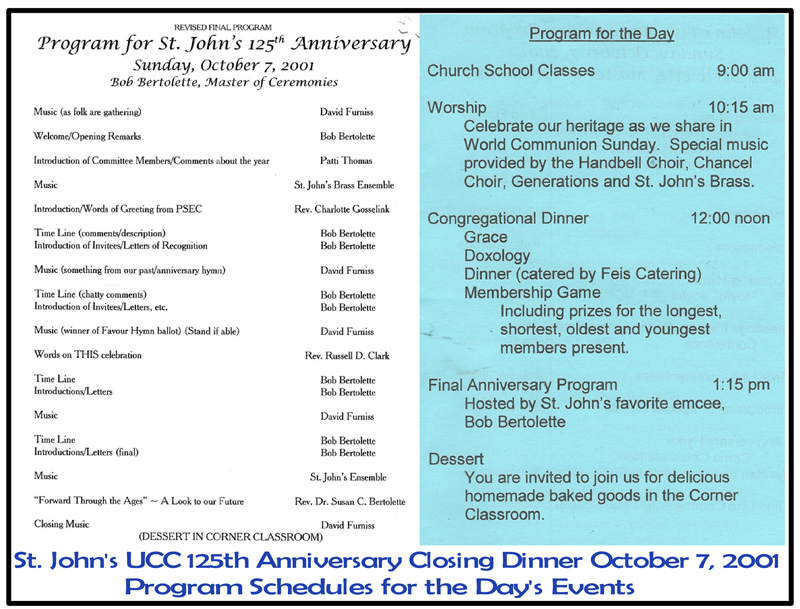 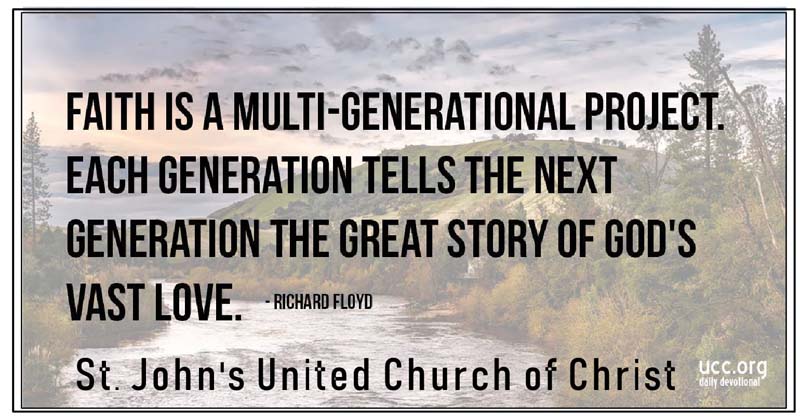